The effective total Resistance to Heat Transfer for single-glazing is Rg = 0.16 m²K/W (disregarding the frame). A Brick Veneer wall (stud and plasterboard) with Aluminium foil insulation has a Resistance of Rw = 1.56 m²K/W, which is almost ten times the value of windows. Windows therefore are responsible for a major amount of unwanted heat transfer into and out of a building. The following comments relate to South-East Queensland climates.

The following diagrams show the amount of total average daily irradiation (direct, indirect and reflective) on vertical surfaces with no shading for Brisbane, in January and in July. 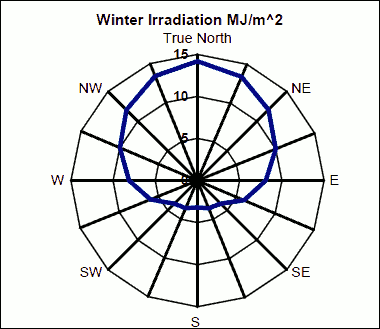