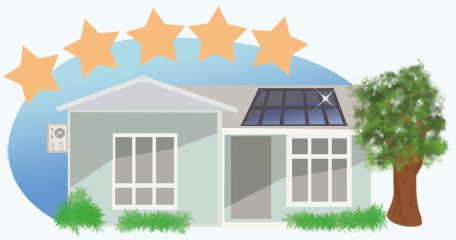 We previously published a newsletter on “Star Ratings and Dollars“. We received some feedback that it’s content was a little confusing to those who aren’t already familiar with various things in the industry. So we thought we’d take a moment to clarify what a Star Rating is and how it can translate into a dollar amount.

The table below is a summary from the NatHERS Software Accreditation Protocol, which determines the accuracy of the Star Rating software. The first column is the building’s location. The second column indicates that location’s climate zone. There is a total of 69 different climate zones that cover all of Australia in the current NatHERS software. The third column details the energy (MJ/m²) numbers required for a 6 Star building. These numbers relate only to the climates/locations listed, other nearby climates will have different MJ/m² numbers. There is roughly a 10:1 range between the highest – lowest energy number for “6 Stars” across all NatHERS climate zones.

The final column in the table above is an estimate of electricity used for heating and cooling only. Other uses of electricity (refrigeration, lighting, water heating, cooking etc.) are not included. Energy for these other uses greatly varies, depending on type and size equipment and how it is used. For example, one assumption made is that the thermostat settings for heating and cooling in the NatHERS calculation is similar to an actual home. In reality, there will always be differences (plus and minus).

If the home is constantly occupied throughout the day by temperature-sensitive people (such as small children or the elderly), the assumed thermostat settings may be similar. However, this assumption may be inexact for people who can tolerate cooler indoor temperatures in Winter and warmer temperatures in Summer (thus using the air-conditioning less often and having lower energy consumption).

We have also assumed the efficiency of the ducted, reverse-cycle air-conditioning unit (Coefficient of Performance and Energy Efficiency Ratio) is 3.0. (3.6MJ = 1kWh thermal = 1/3kWh electrical). The 200m² home may have several non-conditioned spaces, (such as a garage & outdoor living areas) that are not included in the calculations. A larger (or smaller) home, with a lower (or higher) efficiency air-conditioner will have proportionately different kWh numbers for indoor climate control.

Typically, the Coefficient of Performance for heating is higher than the Energy Efficiency Ratio for cooling. Both of these numbers refer to the ratio of heating or cooling delivered, divided by the amount of input electric energy. To split the result between heating and cooling requires more information about how the building is performing over a year. This information can be found from an Energy Rating Report or a NatHERS Universal Certificate.

There are a range of domestic tariffs available from different suppliers in each city. The rates vary depending on the type of account and metering arrangement. Have a look at your electricity account and find the energy charge in c/kWh (or $/kWh). On the electricity account there will be other fees or charges, per day or per bill, which are not energy-related.

Table below shows representative electric energy rates as of 1 December 2016. Electricity prices were for domestic (residential), marginal (last consumption band), all usage (not time of use) including GST. Time of Use tariffs could be more or less depending on whether the period was peak, shoulder or off-peak.

In summary, the Energy Rating of a home is a rough guide, giving only the likely electricity cost for space heating and cooling. The Energy Rating helps ensure buildings built in each climate achieve similar indoor comfort levels.

With the regulatory level for NatHERS set at 6 Stars, think of this as being “OK” (it meets the required minimum performance). Think of 7 Stars as “Good”, 8 Stars as “Great”, 9 Stars as “Exceptional”, and 10 Stars as “Amazing”!

As the regulatory stringency may increase over time, there will be a higher need for skilled, professional energy consultants to advise clients on how to improve their building’s performance. Anderson Energy Efficiency is here to do that with you.