Following from Window Design for House Efficiency the contribution of windows to the total building Energy Efficiency is considered. The BERS 3.2 thermal simulation was used to determine the optimum eaves width for glazing of different heights. The optimum was the minimum of Cooling Energy plus Heating Energy. This article refers only to the Brisbane climate.

A house design tested had high thermal mass, high insulation, low infiltration and single glazing on one side. For glazing facing each true cardinal direction (North, East, South and West), there was a certain shading eaves width that achieved a minimum of energy to maintain comfort for a range of window heights (see Figure). Average “eaves” width for a building elevation included shading structures like carport, patio, porch, verandah or pergola (allowance for percent shade). Eaves width was from the surface of the glass to the edge of the soffit. Window height was from the bottom sill to horizontal with the lower corner of the soffit (Offset = 0). 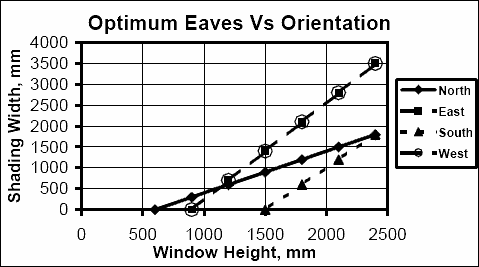 To determine the optimum eaves width for other directions the following formula should be used: