In hotter climates, ceiling fans can provide a big increase in a building’s energy efficiency rating. But how does the National Construction Code (NCC) & National House Energy Rating Scheme (NatHERS) Software calculate their exact benefit? Time to get technical!

All NatHERS-approved software follows the NatHERS Software Accreditation Protocol. This protocol came into effect on the 26th of June 2012 and all complying software packages meet its requirements. They all share the same underlying CHENATH engine (number cruncher). This engine calculates the combined effect of air and radiant temperatures, allows for the impact of humidity and calculates the air speed in each room from cross ventilation and ceiling fans. Basically, calculating the effects of ceiling fans can quickly become incredibly complicated, so the engine makes some assumptions that massively reduces the simulation time. 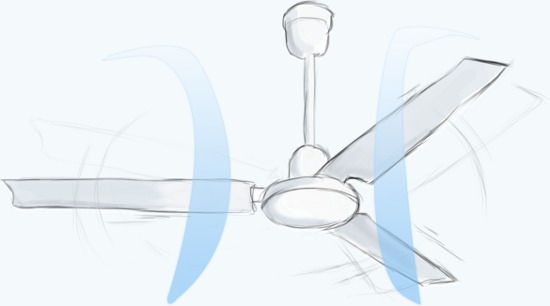 Here’s the basics of the assumptions used by the CHENATH engine:

As for the actual formula calculated per room?

Combined with any impact of natural breezes, the NatHERS software uses this cooling benefit to increase the Cooling Thermostat setting in a room with ceiling fans. This reduces the total Cooling Energy, and naturally benefits hotter climates more than it does colder climates. When ceiling fans aren’t enough to keep the building cool, the software assumes that both the ceiling fans & the air conditioner are used together to provide the lowest possible energy consumption.

But wait – don’t ceiling fans require electricity to operate? They sure do, and this has been taken into account in the assumption figures. While the average small-sized air conditioner might consume 1000 Watts, the average ceiling fan consumes just 50 Watts. The whole point of the NatHERS scheme is to reduce the total energy consumption of buildings. There’s an assumption here that all buildings have an air conditioner (or a future occupant will install one). A ceiling fan consumes only one twentieth the power of an air conditioner to provide an equivalent cooling benefit of up to 2.8°C.

As a final point, while it isn’t mentioned in the Energy Efficiency sections of the NCC, don’t forget that ceiling fans should satisfy other local requirements, including minimum floor-to-fan height requirements.

Whether you are interested in a full thermal simulation of your house to find some suggested renovation improvements, making your new building extra-efficient, or even just seeking some help to make your dream design comply with the building code, contact us for a competitive fee proposal.